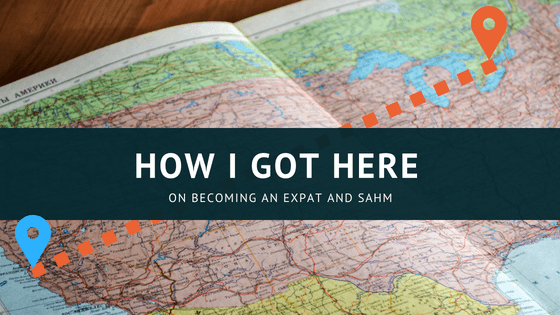 This week marks the three year anniversary – our expativersary – since we joined the ranks of Canadian expats in USA and moved to Silicon Valley, California. With the new adventure and our new circumstances, I became a Canadian expat and a suburban stay at home mom, at least temporarily. Which is an adventure on its own. This is Part 1 of my origin story – becoming a Canadian expat in California.

How I Became a Canadian Expat

About three and a half years ago we decided to move to sunny California from (also pretty sunny) Toronto, ON. Husband got an amazing job opportunity so we quit our jobs and headed for the Wild West.

Before all this, we never actually planned to move anywhere. We had briefly discussed it in the past and dismissed it immediately. We love Canada, we love Toronto. Our families are there. We had good jobs and a great support system. Why would we ever want to live anywhere else? Husband is a Toronto native and liked it that way (fun fact: Husband and Lulu were born in the same Toronto hospital!). Even when he flew to SFO for his interviews he maintained that he would not be moving anywhere, that he had no intention of becoming American and that he was only doing the interviews because he was curious. Clearly that didn’t last…

I have been through immigrations and moves before. Of course I was much younger when my family immigrated to Canada and I saw the move though my teenage kid eyes. Now, I was going to experience it though my adult mom eyes. It was exciting and also scary. But with a great job lined up for Husband it was also the best kind of move we could make – moving on our own terms with a clear plan and a lot of help and resources from the company he’d be working for. It wasn’t a real immigration of course. At first, Husband was coming to the USA on a temporary work visa and I was joining him as a dependent.

It’s weird to be a “dependent” as a grown adult. In Canada I had a job. A great credit score. A driver’s license. Now I was suddenly thrown back to feeling like a 16 year old again, needing to pass my road test in a borrowed car and asking my husband to get me a cell phone because I couldn’t sign up for one on my own. It can be surreal and somewhat disheartening at times. Becoming an expat, in many ways, means starting over.

Even with so much unknown as an expat mom, I couldn’t put my life on hold. We both had careers and a family that we were ready to grow.

The plan when we moved was that after we find a permanent place to live and a daycare for Lulu, I will find a job and get a work visa as well. I worked in IT and we are in Silicon Valley after all. I was excited for the prospect of seeing what cool companies I could work for and what cool jobs I could get. I updated my resume before we headed back home to Toronto for the holidays that year.

At the same time, we were also ready to add another member to our family. We figured we’d do both, start trying for a baby while I look for work and see what happens. It took us 6 months to get pregnant the first time and that would be plenty of time to get settled at a new workplace. And who knew, it might take longer the second time around. But we got lucky and got pregnant on the very first try with Booboo! I found out I was pregnant when we came back to California after xmas vacation and my plans to go back to work were put on hold.

I started a new adventure and became a stay at home mom with an expat mom blog. There are huge communities of stay at home expat moms here in Silicon Valley who are all in similar situations. They come here as “trailing spouses” from all different countries and find a community of other expats to connect with and share in the strangeness of this new land. There are whole Facebook groups dedicated to the experience of being a Canadian expat in the USA.

Are you starting to notice a pattern about all our foiled plans? It’s nice to have plans, but gotta stay flexible and adapt!

Adjusting to the move

Everything feels challenging when you move far away. From the big things, like finding a place to live, to the little things like finding a new favourite grocery store. Like these 5 everyday surprising challenges. Being a Canadian expat in California means that we didn’t have to learn a new language or get used to a new culture. But there was still some getting used to. We miss the Greater Toronto Area, the culinary scene, the diversity (The Bay Area is really diverse too, but in a different way).

Toronto also has a much larger Russian-Jewish community and I do miss it at time (or perhaps just more ingrained in the general culture). The gourmet European Delicatessens, the readily available Jewish foods in grocery stores. Canadian Jewish foods like Bagels with Lox and Montreal Smoked Meat sandwiches. There are also times when I miss meeting other people with similar cultural background to myself.

There are still days when I am not sure that moving was the best decision for our family. I grew up moving around a lot, and having to adjust to new places and make new friends. While I know what to expect, doesn’t mean I love it. A part of me isn’t sure I want to put my kids through moving every couple years, living in temporary apartments. It’s nice to have a home base and stay put in one place for a while. Lulu is regularly asking for a house with a yard and a dog. I keep telling her “someday”.

At the same time, exploring and adventuring and traveling is so rewarding and I really do think getting to live in different places helps people develop empathy and how to identify with people from all walks of life. I have a lot of great memories from the different places where I lived. Growing up, my family was really close because we always had each other and sometimes, we only had each other. I want my children grow up with a healthy sense of adventure and kindness.

Luckily I did find a great community of Canadian expats here in Silicon Valley. It still took a long time to start feeling at home. Everyone said “give it a year” then they said “give it a couple years”. I would say that after two years or so I finally started feeling like I have a place here, good friends and a support system that I can rely on. I feel like I don’t have to start from scratch and explain where I am from every time I go somewhere because people already know me.

I still miss my friends and my family every day. I am grateful for technology, for facetime and facebook for helping me stay in touch with everyone and keep an eye on what’s going on back home. I feel guilty for depriving my kids of their grandparents and vice versa and I feel sorry for myself for depriving myself of much needed help. But we’ve also had so many wonderful experiences since we moved.

California has so much to see and explore. The weather here in NorCal is amazing with mild winters and consistently sunny summers. I know Husband really misses the summer thunderstorms of Toronto, but for myself, I love knowing that it will be hot and sunny without checking the weather. Maybe it’s growing up in the dessert, but heat doesn’t really bother me much (though I am grateful for A/C). We definitely don’t miss the humidity.

When the weather is reliably good, it’s easy to get out of the house and go exploring. There are some amazing beaches and hiking. And of course wineries and wine countries. We got to explore some of the west coast over the past couple years but we still have so many places we need to see!

Unfortunately we don’t make it to exploring San Francisco as much as I would like, it’s a very interesting and colourful city. We’ll keep exploring it bit by bit, slowly but surely.