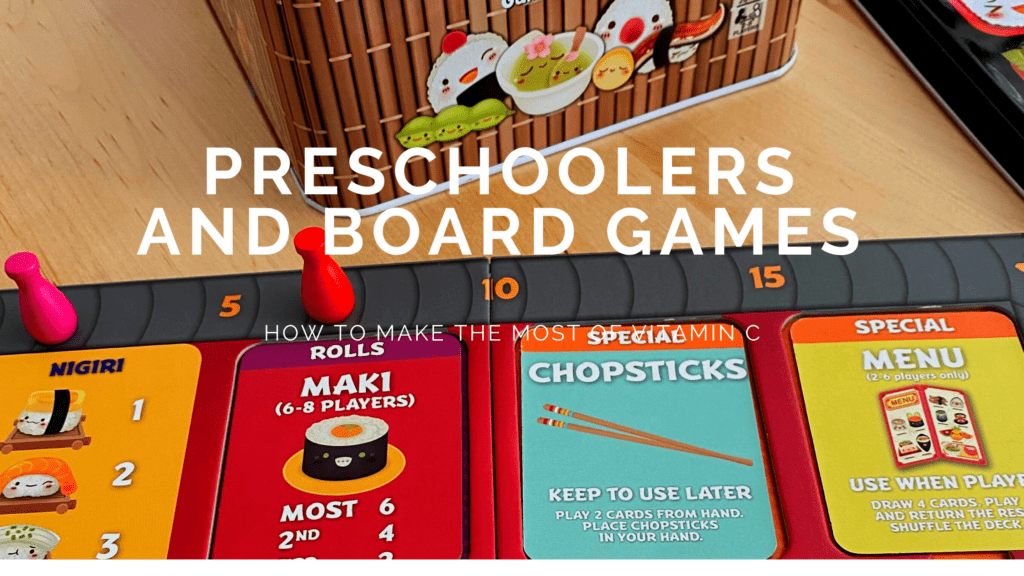 One of the things I most look forward to as a parent, is when the kids get old enough to be able to do some of our favourite things as a family. Board games being at the top of this list. But unfortunately I have discovered that board games and preschoolers don’t mix.

Last night our family reached two big milestones in a single family game night. Booboo, who is five years old, got through her first complete game. It’s a huge step because up until this point she usually got very excited to be included in the game only to get bored waiting for her turns and following the rules. She then quit after only a few hands. We usually keep her in when needed for game play and take her turns randomly without looking at her hand. I’ll tell ya, Rando is getting pretty good at board games. But last night we were playing Sushi Go Party (The eight year old’s favourite game) with both kids and for the first time ever, did not tag in Rando to finish up the game.

Unfortunately, last night’s game was also the first time that this preschooler cared about how many points she got in the board game. And it was not a lot. Her strategy of always picking the cutest card in her hand – and the cards in this game are downright adorable – was not paying off. By the third round she had angry tears streaming down her face because she was in the back of the leader board. I tried to sympathize but I was winning and she did not appreciate it when I pointed this out.

We already went though this phase three years ago with the older one (who is eight now and doing great at games). Having a preschooler who is going to cry every time they lose or try to cheat really, REALLY badly, was not the fun board game nights that we wanted to have. I realize that these behaviours are entirely age appropriate and that it’s our job as their parents to initiate them into these experiences in a safe and loving environment with no judgement. But it made family game nights kind of suck. It did not help that during that time, Booboo was a toddler. And as much as board games and preschoolers don’t mix, board games and toddlers are an absolute nightmare. So for a while, family game night was more punishment than reward for making these people who would play games with you.

Fortunately, this time around we were able to take it in stride and even have a laugh about the whole thing. Having an older sibling around who has been through this was big help. While I was comforting Booboo and telling her that she played the game so well, following the rules and not quitting even when she was behind in points, Lulu was apparently copying the preschool “Ouch Report” that Booboo gets whenever she gets hurt at school (we get these reports multiple times every week, poor kid). She presented the Ouch Report to us and it was the comic relief we all needed at a stressful time. Even Booboo stopped yelling and laughed.

Sometimes kids can be frustrating, but often times they are wonderful. The sense of humour and comedic timing that the eight year old is displaying lately is incredible. And I know with the second kid that getting through these frustrating phases with grace and empathy is an investment in our family’s future. I’m looking forward to years of great family game nights with clever and witty children who will surprise us and make us laugh. Until then we’ll keep the expectations low, because preschoolers and board games don’t mix.

Want more funny posts? Check out These Five Things That Are More Fun With Kids

Besides Sushi Go Party, another board game that 8 year old loves is Mantis (not an Ad). Give it a try!