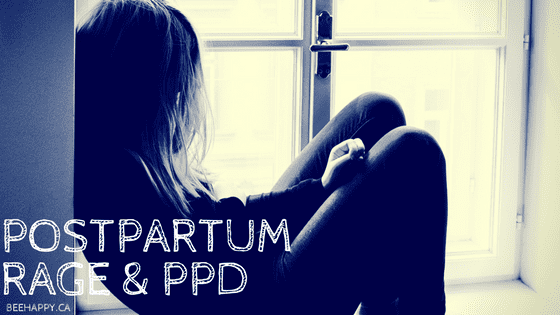 About six months postpartum I started becoming very short tempered. Call it postpartum depression or postpartum rage. There were days when I woke up just annoyed. At everything. There were days when every little thing made me angry. Things that are usually a mild annoyance became enraging. Sometimes I could tell I’m overreacting as it is happening. Almost like an out of body experience where I saw myself yelling and freaking out, somewhere I thought “why are you getting so mad? This isn’t a big deal” and yet I was still yelling, I couldn’t seem to stop being angry. I didn’t think I had PPD, I didn’t have the “normal” symptoms of not being able to stop crying or feeling unhappy or depressed all the time. I just had this rage seething just below the surface ready to explode at any provocation. A little while ago, I posted about the first steps I took to recognize and deal with all that rage and PPD. In this post I go into much more detail regarding how PPD manifested in me. Hopefully this story about my postpartum depression and postpartum rage will resonate with you.

How postpartum rage and depression was affecting me

Postpartum rage was starting to affect my relationship. My poor husband got the worst of it. I was able to keep it together with the kids for the most part. Obviously I can’t get mad at a baby for just being a baby. Lulu did experience some of my short fuse but I could usually contain and control my anger or at least take a mommy timeout.

But by the time Husband got home from work, my nerves were shot. After spending all day pushing the anger down I would lash out at him. I didn’t realize how often I was getting mad for seemingly no reason or how unapproachable I was becoming until he finally said something. He was very gentle in suggesting that maybe I need help; I guess he didn’t want to incur more of my wrath.

After he pointed out that I might have postpartum depression, my initial reaction was “no I don’t”. What I was experiencing didn’t really fit the idea of PPD that I was always taught about. But the more I thought about it the more I started to realize that I haven’t been feeling like myself for weeks. Somedays I woke up angry at the world. I started to be more aware of the “angry” days and I started to be more aware of the feelings that seem to trigger the anger. I also reached out and  started seeing a therapist. She wasn’t as helpful as I expected (I’m not sure what I was expecting to be honest). But even having someone to talk to about what’s going on who seems to understand was tremendously helpful. I also learned that postpartum rage is really common and happens much more often than it is talked about. Check out Postpartum Progress for more stories and resources about postpartum rage.

I know that anger is a pretty common symptom of depression. I had some similar symptoms when I was struggling with a bit of depression after our big move. But I didn’t make the connection between my anger and PPD. My symptoms didn’t match the cookie cutter stereotypical idea of what depression is like. Here is the “mom” section of the questionnaire I fill out at every well-child appointment for Booboo

I don’t think I know anyone who has not felt “down” at least once in a two week span. But overall, I don’t feel depressed or hopeless. There are days or even weeks when Booboo seems to wake me up every hour or two at night and refuses to settle down. I sure feel no interest or pleasure in “doing things” on those days. Sounds like being tired makes you positive for PPD. That doesn’t seem right. So if these kinds of typical questions that the doctors ask don’t help us figure out whether there’s actually something wrong, how are we supposed to know?

Despite the fact that by now most of the general population seem to know about PPD and be fairly accepting of it, it’s still hard to get help. Part of the reason is that you are supposed to be self-aware enough to differentiate between “normal” postpartum symptoms and moods and PPD symptoms like postpartum rage. All new mothers are stressed and sleep deprived and with that comes being tired, impatient, scatter brained, anxious. New moms are often lonely and overwhelmed. These things can, and often do, lead to PPD but they don’t always. I didn’t experience PPD and rage after my first baby even though initially I was hit with the baby blues pretty hard.

When you spend your day in a haze of exhaustion, changing diapers and breastfeeding, it can be difficult to tell how much depression is “normal” and how much depression is “I need help”. This is probably why many of the women I know who do seek help wish they had done so much sooner than they did. Not to mention that even once you realize that maybe you need professional help, the idea of having to find the time to go to the doctor or call therapists to find the right one or actually schedule an appointment to go see someone, can be stressful and anxiety inducing on its own.

Getting Help for My Postpartum Rage

I really do think that being aware of the problem is a big step towards feeling better. I am better about taking time for myself regularly and I’m starting to recognize some of the feelings that cause me to feel negatively in general. I learned that talking to someone about how I was feeling was extremely helpful – it helps when the someone is a paid professional so you won’t feel guilty unloading on them.

I also make sure that my incredibly involved husband takes over regularly to give me a chance to recharge. Being a feminist dad has been great for him as well. It isn’t enough to have a break once in a while when you’re so worn out you can’t take it anymore. It does wonders for mental health to have regularly scheduled time to yourself, time you can count on and look forward to.

My underlying identity crisis around motherhood is still an unresolved issue that I’m working on. Writing this blog has been incredibly cathartic.

I know that awareness isn’t always enough and I know women who are aware they need help but still have difficulty getting it. There is a real problem when it comes to supporting new mothers in North America and PPD is definitely a symptom of this larger problem. Being told by a nurse to “get help if you need it” as you’re being checked out of the hospital with a 2-day old newborn is the equivalent of a well-meaning but clueless friend telling you to “call if you need anything”. It sounds like a good thing for them to say at the time but it’s too vague to be taken seriously and doesn’t offer any actual help. We need to do better.

I’d love to hear from you. Did any of your postpartum symptoms come as a surprise? Did you find any great resources for PPD?

If you liked this post, check out this Baby Blues and PPD guest post I wrote for a wonderful series by fellow blogger called We Are Motherhood