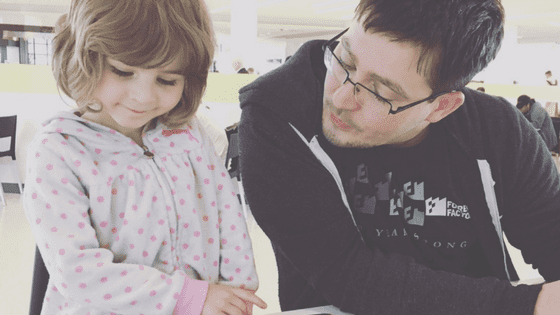 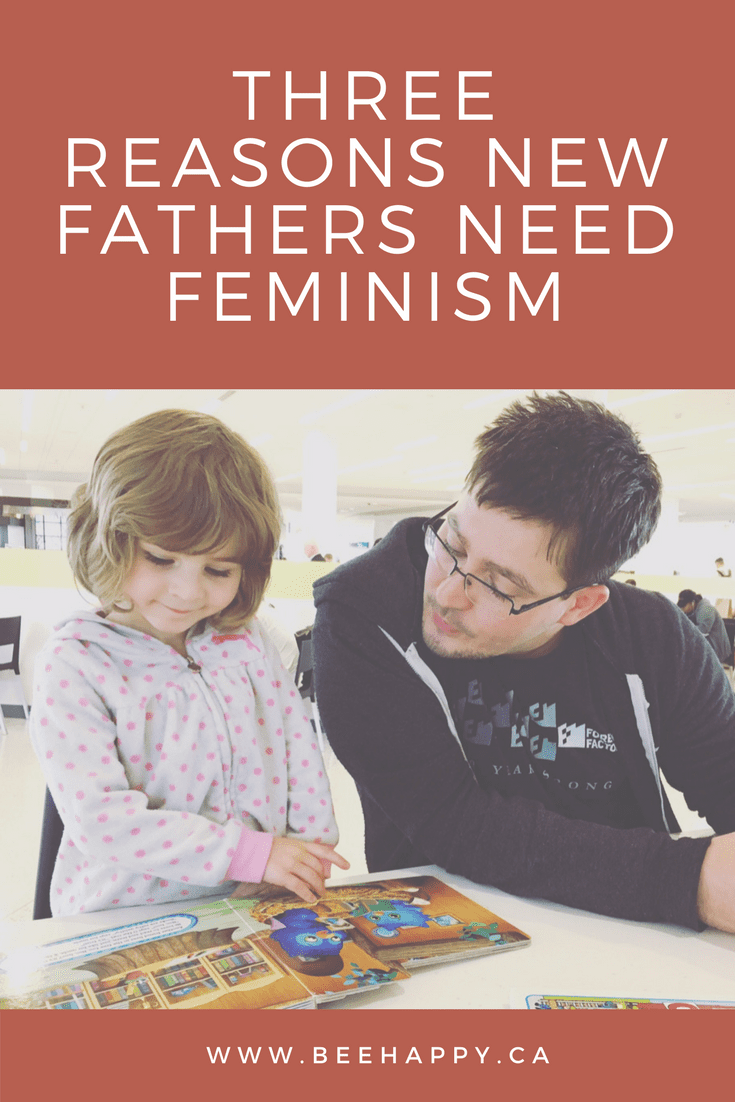 In 2018 you would think that we’d be past this, but we aren’t. I still hear people say things like “Men are just not cut out to take care of babies” and “Babies just need their moms” when a new dad is struggling. Maybe the father seems a little too aggressive when the baby starts crying. Maybe the father seems to miss a button every time he puts a sleeper on the baby – those sleepers have like a million buttons! Maybe the father seems like he’d rather drink beers with his friends than to spend time with his new child. These fathers don’t need pity and excuses. They don’t need to be dismissed as incapable. What new fathers really need is feminism.

Just like the little girl who, from a young age, was told that sports weren’t for her, little boys have been told for centuries that taking care of babies isn’t for them. They are still told this today by the most well intentioned people. Does every new mother enjoy changing diaper blow outs or shushing the baby while bouncing on a yoga ball for hours every night during witching hour? I will tell you from experience that we do not. We know we have to do it, so we do. And if we don’t know how, we learn.

When a new mom is struggling I have never heard anyone say “women are just not good with babies, wait till the kid grows up a bit”. I can’t even imagine hearing that, it would be ludicrous. But I hear that about new dads all the time. Society expects moms to suck it up and get on with it. It’s time we start treating dads with the same can-do attitude. Here are my three reasons new fathers (and their well-meaning enablers) need feminism.

Reason 1: Fathers who work too much

There is the new father who uses his job as an escape. He leaves early in the morning and comes home late at night. Maybe he has other commitments after hours that keep him from being a full fledged contributor in the home. He’s intimidated by the stress of taking care of his baby. If he isn’t used to handling newborns maybe he has anxiety about doing something wrong. He might have spent a lifetime thinking that he is above that kind of work – or that taking care of kids isn’t work at all. At any rate, he prefers to not even try. He feels much more confident in contributing to the household financially and he doubles down on work and is relieved to leave the childcare to his wife. He gets a pass because society excuses his apparent lack of interest as “normal”.

Maybe he doesn’t feel comfortable taking time away from work to achieve more work-life balance because he knows taking a step back can hurt his career in the long term. There are studies that show that mothers are heavily penalized in the job market, and the more children a woman has, the more her career suffers. Meanwhile, men’s careers seem to become more successful the more children they have. How is that possible? Because having a partner at home who takes care of the household allows fathers to be better contributors in the workplace. Usually the responsibility to manage the kids and household falls on the mother regardless of whether she’s a stay at home mom or not.

I haven’t seen studies about how taking time off for kids affects men’s careers but I wouldn’t be surprised to see a similar negative consequence that mothers face. If an employer was operating under the stereotypical assumption that a baby will not affect their male workforce, it can leave employers scrambling and in turn penalizing the employee even more due to the unexpected frustration. Encouraging work-life balance and having policies in place that allow parents to “have it all” should be as available for dads as it is for moms (which is still sorely lacking in many workplaces). There are already many places and companies that are taking steps in the right direction. Facebook, for example, gives every employee 4 months parental leave and men are encouraged to use this time off without penalty. Canada has a federal parental leave benefit of 35 weeks that can be taken by either parent – unfortunately, there is still a lot of prejudice that men face in their workplaces if they actually choose to take the leave  they are legally entitled to. This is why new fathers need feminism.

There is the father who seems incompetent. Every decision he makes is overruled by mom or grandma and he gets told again and again that it isn’t his fault, men are just incompetent when it comes to babies. You see commercials for baby products that say “so easy, even dad can do it!” Fathers are bombarded with messages that screwing up is what they do and they themselves start to believe it.

But is that really true? There is nothing that makes a man incapable of properly changing a diaper or soothing an ouchy or braiding hair. Like any life skill new fathers deserve society’s confidence and the chance to practice being good parents. As a new mom, I felt a lot of anxiety when we brought Lulu home. I was not exposed to a lot of babies growing up and I didn’t know what to do with them. But one way or another I had to learn because mothers don’t have a choice. They are expected to know what to do. Meanwhile fathers are undermined at every step to a point where they don’t bother trying anymore. They either give up altogether or they make a half-hearted attempt whilst knowing that someone will come and fix it later. The watchful eyes and safety nets, the pats on the back and “at least you tried”s are actually hurting fathers’ ability to competently care for their babies.

Mothers also tend to get a lot more opportunity to learn just due to sheer trial and error. Mothers are expected to spend more time with their babies. They get to know their babies’ patterns at every moment of the day, they get to see how their babies change from day to day. We are faking it and trying things until we find something that works. We are posting on mom groups asking for advice and downloading tracking apps and reading the latest expert articles to figure out what’s going on.

Fathers deserve the same confidence that they can figure it out if given the time and opportunity. But often the chance is taken away from them at the first baby cry. Will they do things the same way as their partners? Probably not. But does that make their way any worse? Also no. This can be a difficult thing to put into practice. Even I fall into this trap where I think “I already figured it out, just do it my way”. But I’m working on it. I am trying to remember that every parent-child relationship is unique and therefore the methods that work for one parent might not work for another. Even in the same household. We need to allow (and encourage) fathers into this sometimes-secret world of childcare and actually let them figure it out. This is why new fathers need feminism.

Then there is the father who is just not handling the baby well. He’s grumpy when he doesn’t get enough sleep. He gets frustrated and upset when the baby cries. He’s disgusted by dirty diapers and spit up. It’s easy to get mad at a father like this for being unenlightened. Or to make excuses for him that, alas, he’s “just not cut out for babies”. But you know what else he could be? A normal human being.

There are many mothers who don’t handle their baby crying well. I am one of them, I know. When the baby is crying for seemingly no reason and I can’t seem to calm her down everything in me goes on high alert. I feel anxiety and stress, I snap at anyone who might get involved (my poor husband gets the brunt of it). Between the helplessness of not knowing what to do and the anxiety caused by sensory overstimulation I do not handle crying well at all. I am not alone. I have read many articles about Purple Crying, the witching hour or how colicky babies can lead to PPD.

Did you know that most cases of shaken-baby-syndrome happen when a baby is crying inconsolably? Every baby book out there has information on how to not harm your own baby at these times of stress – the advice “put your baby in a safe place, like the crib and leave the room” is very common (by the way, there is a website for raising awareness of this very trying time and there is even a section for Information for Dads). If mothers who are supposed to magically know what to do need this information on dealing with the stress of babies, is it any wonder that fathers might need the same kind of support and understanding?

Don’t get me wrong, being stressed and anxious is not an excuse for fathers to check out of babyhood or to mistreat their child in any way. A man who grew up in a society that discourages dealing with emotions and instead encourages responding to negative feelings with aggression, might have no idea what to do. This particular scenario might require more willingness for personal growth from this father. Recognizing that there is a problem in how he handles his emotions is the first step. Accepting the narrative that this is just how men are wired doesn’t do the household any favours.

Sleep deprivation, sensory overload, isolation and anxiety are all things that new fathers face as well and it can lead to frustration and anger. Many new fathers also face postpartum depression, though it is rarely mentioned at all and there is definitely very little awareness of this. Men are not above experiencing difficult emotions and they need to learn to deal with them in a healthy way. This is why new fathers need feminism.

Sometimes new mothers (and grandmas and inlaws) need to tap into their inner feminist and resist taking over for her partner when things are not going well. . New moms need to learn that they have loving capable partners who can be counted on and expected to do their share. Especially if you already have the preconceived notion that fathers are somehow less nurturing than mothers are, this can be a hard thing to remember when you’re elbows deep in diapers and sore from bouncing on a yoga ball. It can be easier to just do it than let them help. But they aren’t “helping us”. They are parenting their children. They should be allowed and expected to do so. This is why new fathers (and new mothers) need feminism.

I am always excited to hear from my readers. Leave a comment and let me know what you think about fatherhood and feminism.