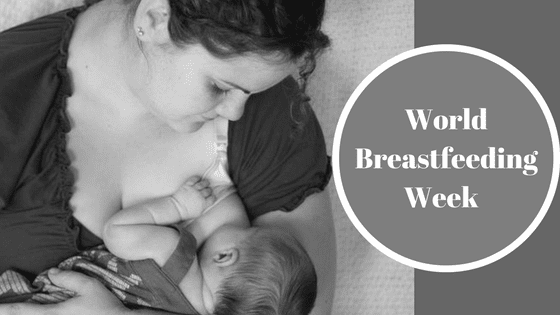 Every breastfeeding journey is different just like every mother’s relationship with her baby is different and we all face different struggles. Like many new moms I have had my share of challenges with breastfeeding and in the spirit of World Breastfeeding Week I wanted to share my story. My struggles were mostly due to a combination of overactive let down and delayed let down reflex – a pretty rare combo from what I discovered in my research. This is how I figured it out and what I did to turn our breastfeeding relationship around and nurse my first daughter for the first year of her life. There are links to a ton of resources as well for anyone who needs help with breastfeeding.

How the breastfeeding struggles began

“The first six weeks are the hardest” is something I heard a lot when I was pregnant. I wonder how many women hear that same well-meaning line meant to prepare them for the sleep-deprived-marathon-cluster-feeding-sessions of those first few weeks in which many breastfeeding mothers give up. In my case however, this was not a problem. From the very start my milk came in strong. I had an oversupply and was producing too much. Lulu’s latch was good and her suck was strong. I had overactive letdown reflex which meant that milk literally shot into her mouth at firehose speeds. Unlike many new moms our nursing sessions in those early weeks lasted 5-10 minutes and I was pumping for comfort and even managed to build up a 2-day freezer stash.

I’m not saying this to brag. The reason I’m saying all this is because I sailed through the first 6 weeks of breastfeeding relatively unscathed and thought I was in the clear. This breastfeeding thing was easy peasy. And that’s when the problems started.

Around 8 weeks postpartum Lulu started rejecting me. At first only occasionally and I thought maybe she was overtired or over hungry but more and more often she refused to nurse. She would latch and promptly unlatch and cry. We’d try again and again until Lulu either settled down and nursed or grew so agitated that she screamed and refused to even let me hold her. Over the next couple weeks these episodes got more frequent and more intense, sometimes happening multiple times per day. I mentioned this at Lulu’s two months appointment and the doctor told me that she’s happy and healthy, gaining weight well so everything was good.

Feeling rejected and resentful while breastfeeding

It got to a point where I was in tears trying to nurse my own baby. At times she would nurse fine and I’d sigh a sigh of relief for a couple hours. I would delude myself into thinking “see? Everything is fine. We’re fine”. Other times my happy, smiley baby would start screaming whenever I tried to come near her. I was scared to go out in public with her because she was unpredictable.

There is nothing scarier than being surrounded by strangers with one naked breast hanging out, trying to shove your nipple into a crying baby’s mouth who starts screaming even louder to get everyone’s attention.

Thinking back now, it was only a period of a couple of weeks but considering that babies eat 6-8 times per day, every day felt like an eternity. Every couple hours I was filled with dread at the coming struggle to feed my child. Lulu even went on a couple of nursing strikes where she resisted nursing so much that she wouldn’t eat for 8-9 hours at a time. I was a mess too. I felt rejected. I felt vulnerable and anxious. I was stuck at home by myself with this baby whose life depended on me and I was scared of trying to feed her. I would call Husband at work in tears and bawl on the phone that I couldn’t do it. I was starting to resent my own daughter.

Finally getting help with overactive but delayed letdown

I saw my doctor again two weeks after that appointment and insisted that he refer me to the Newman Breastfeeding clinic. In the meantime I was scouring the internet and the mommy groups trying to figure it out. Most of the resources to tackle breastfeeding issues deal with problems with latch and supply in newborns. There was very little troubleshooting info for a case where the supply is good, latch is good, baby’s growing well but refuses to nurse just to torture mom. Luckily I did come across the kellymom website, and it was a life saver. After reading everything there was about baby refusing to nurse I suspected that the problem was a combination of  slow let down and forceful let down. Basically my let down reflex was both really strong but also took a while to start.

Going to the Newman Breastfeeding clinic in Toronto was amazing. The IBCLC I saw there was great. She agreed with my self-diagnosis about the strong but delayed let down reflex. Lulu was checked and determined to have a posterior tongue tie. That meant that Lulu’s tongue’s range of motion was limited and she had a hard time moving it up and down, which is a necessary motion when breastfeeding.

Delayed let down reflex: How I managed to turn it around

The likely reason why this started happening after the first few weeks is because around 6-8 weeks postpartum, milk supply tends to stabilize to meet demand. With less over-supply and engorgement Lulu had to start working for it. It was now her job to trigger letdown. In the 30-45 seconds it took for the milk to come she grew frustrated and gave up. The more anxious and upset we both got, the more that interfered with my supply and delayed letdown even more, exacerbating the problem.

I didn’t have much luck with some of the solutions proposed online – like programing myself to letdown with routine or pictures and videos of my baby. I was never one of those women whose breasts started flowing just from hearing another baby in the supermarket. The pump didn’t work much better. Unless engorged, I could never get a let down to trigger with the pump. Let down reflex for me was triggered by baby. I couldn’t trick my breasts.

The basic solution was to keep Lulu calm and sucking long enough until the forceful letdown happens. Here are some of the strategies we came up with:

Eventually, by the time Lulu was almost 4 months old, the worst was behind us. I wish I could say it was a breeze after that. But Lulu, as it turned out, was not destined to be a great eater. For a long time I blamed myself and wondered if those early weeks somehow caused her to develop a high tolerance for hunger. I had lasting anxiety about breastfeeding her for a long time.

An IBCLC is a breastfeeding-mom’s best friend

Nonetheless I am grateful that I had the Newman clinic to go to. Our breastfeeding relationship improved tremendously after that. I managed to breastfeed Lulu for the entire first year of her life, until I went back to work and she went to daycare. I don’t think I could have done it without their help. I’m also grateful that online resources like kellymom exist. I learned a lot about breastfeeding and letdown reflex. I learned that you can have fire-hose-like overactive letdown and slow delayed letdown at the same time.

If you are a new mom and you’re struggling with breastfeeding, please find an IBCLC in your area. No matter how old your baby is. No matter what your friend or your mom or your nurse said. No matter even what your doctor said. A good lactation consultant will help you figure out what’s wrong and how to make things work in your unique situation.

When Booboo was born here in California, I even saw a LC in my own home. Booboo didn’t have the same issues as Lulu, breastfeeding went much smoother with her. She did struggle with the force of my letdown at first. Combine that with my anxiety over breastfeeding and I was worried enough to see a LC.

I linked to all of the resources I mentioned in this post. If breastfeeding is your goal, please look them up. If you have amazing breastfeeding resources to share, leave a comment below.

I was lucky enough to have maternity leave for almost a year when Lulu was born. By the time I went back to work, I didn’t worry about keeping up with my exclusive breastfeeding. But if you’re a working mom who plans to go back to work while still exclusively breastfeeding, check out this post with strategies on pumping at work and keeping your supply up while away from baby.