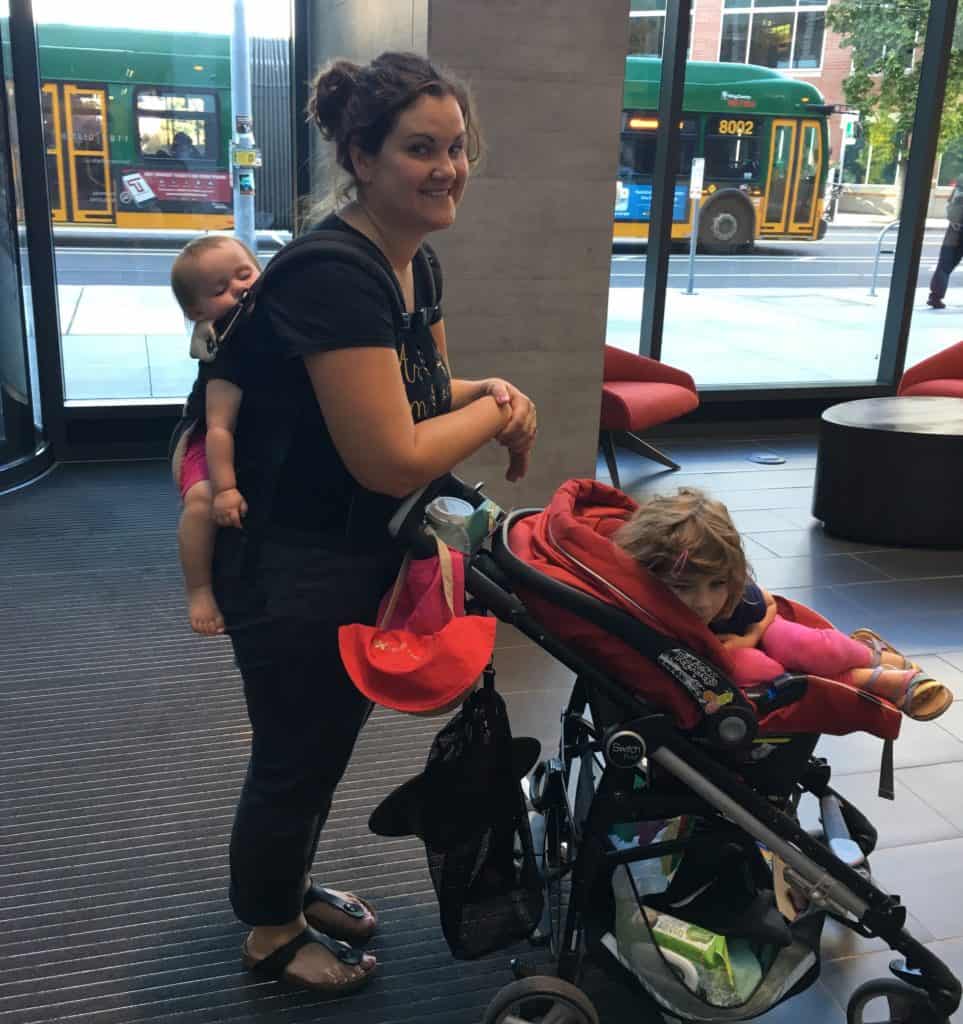 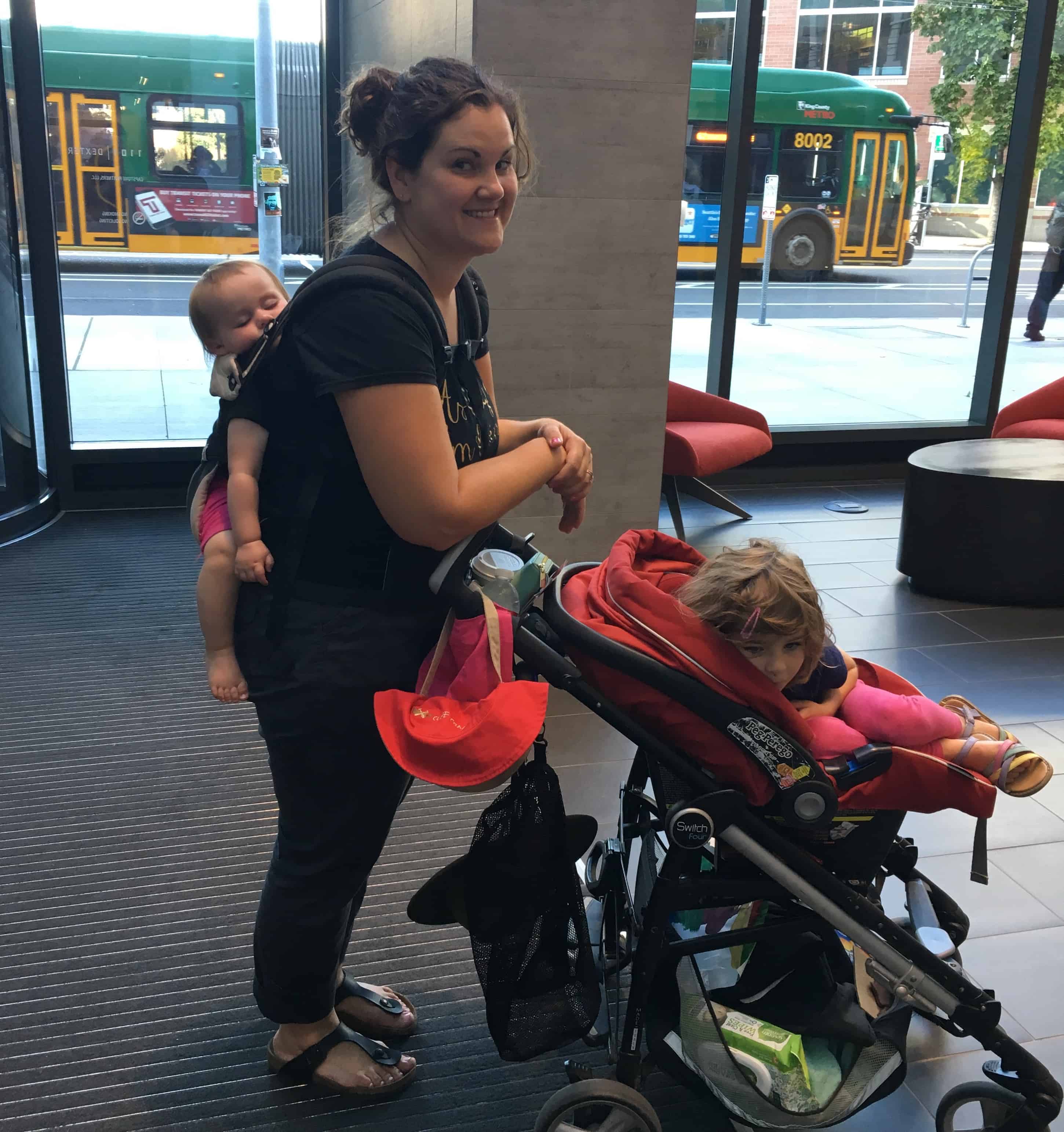 I felt like a Supermom in not-so-kid-friendly Seattle. For a city that boasts being very kid friendly I didn’t see many kids around the downtown area (this is based on my googling “what to do in Seattle with kids” and seeing results about how great Seattle is for kids. In hindsight I guess it was a bit of a self-fulfilling prophesy. What city wouldn’t tell parents looking for suggestions that they are kid friendly).

Of course there were kids in the areas that were meant for children, like the parks, and a few kid specific destinations. But just walking though the city I saw very few parents with kids. I barely saw any families in the couple of grocery stores near where we stayed and the baby sections were pathetic and practically non-existent. I needed the baby section because I made the mistake of only bringing two pacifiers with me, naively thinking “there’s nothing that I can’t buy there if I need it”. Well I lost one of them the very first day and I couldn’t find another one in any of the stores around Seattle Center. The pet sections on the other hand were gigantic and I did see at least 3 dogs in strollers.

There were a few times when I felt out of place. I felt people look at me as if I was something strange to behold. I’m pretty sure I got more curious looks than actual grown up adults using skateboards as a means of commuting to work. Sometimes people looked at me with admiration, as if to say wow, look at you go!

Other times I felt their bemused and judgmental glances in my direction, as if they were thinking wow, glad that’s not me. Occasionally people’s looks were almost annoyed, as if my very presence with kids was bothersome. In my supermom moments I silently told them to fuck off and that they should be so lucky. In my most vulnerable moments however, I felt embarrassed no matter how super I thought I was doing until that moment. I wanted to stop these people and explain to them that this isn’t really me. I’m not meant to be this person spending her days changing diapers and negotiating with preschoolers. I wanted to tell them that I was like them once. That I’m smart and educated and a professional. That I belong with them, not with the breeders. I’m not proud of feeling this way and that’s something I’m continuously struggling with and working on.

I spent much of the week pushing a stroller with Booboo inside and Lulu riding on the back of it. Or with Lulu in the stroller with Booboo in the carrier attached to me. This way I managed to breastfeed Booboo and make sure both kids got naps and rests when they needed. As much as I may seem very casual about breastfeeding on the go, and indeed I have come a long way since the nervous wreck I was when I was nursing Lulu, I still feel very vulnerable when I am on my own with cranky hungry baby and likely tired preschooler, among strangers, with a breast hanging out. If I seem unbothered it’s because I have perfected faking it for the sake of the kids. If I can’t stay calm they for sure won’t. The more I do this, the easier it gets to take it in stride. And when it works well I feel really badass. I’ve had a lot of practice this summer nursing in the carrier while going out, though usually with the buffer of Husband. This time I had no buffer and at times it felt nerve-racking.

By the end of the week I realized that I had fewer and fewer of these vulnerable moments. I was proud of my kids for how well they did despite unfamiliar sleeping arrangements and lack of any kind of routine. I realized that I myself have come such a long way in the past two years since becoming a stay at home mom. 2015 me would not have been comfortable schlepping all over a strange city with two kids. It wasn’t always perfect and I definitely had my hot-mess-mom moments as well, but by the end of the week I was no longer ashamed of being “just a mom”.

People still gave me judgmental looks but I ignored them more easily. I smiled at them and made them feel uncomfortable instead. Some day I will be that educated, smart professional again. But until then I’m proud to be a badass super mom.

Lulu had a lot to be proud of as well, she conquered the giant play structure at Seattle City Center and we both learned a lesson about the different people you’ll meet in the urban jungle gym.