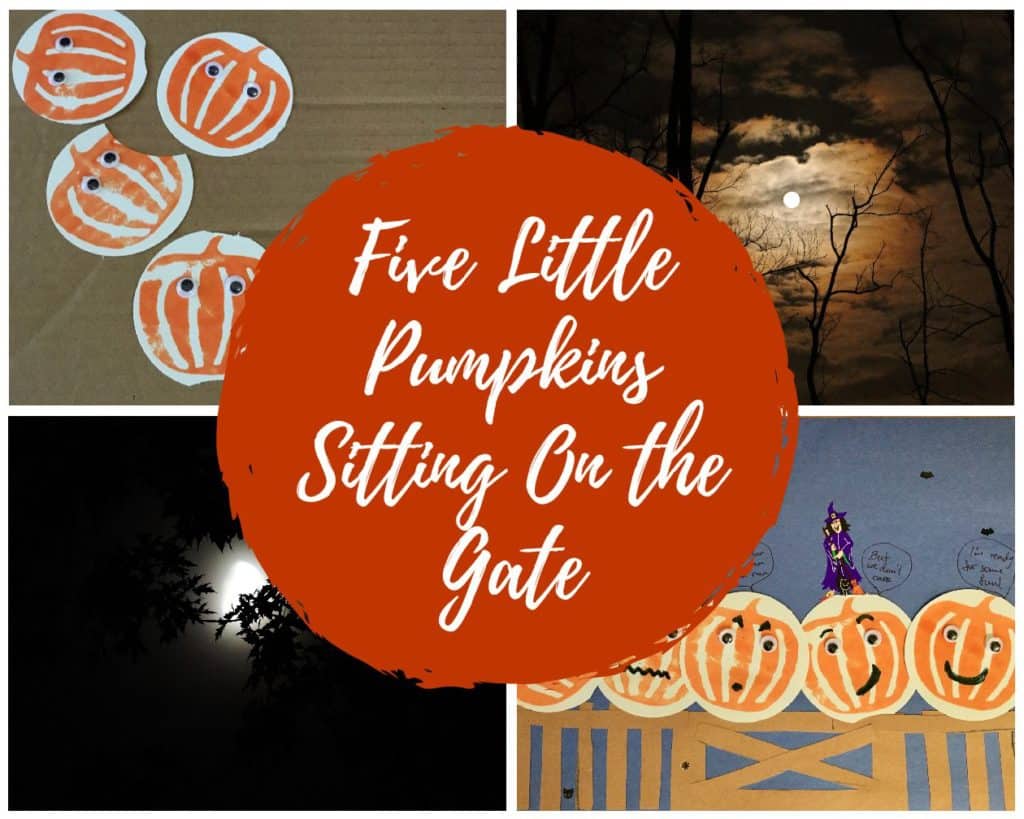 I wanted to share this Five Little Pumpkins Halloween craft I did with my older daughter last year. It is based on the 5 Little Pumpkins rhyme. It’s very simple, we were able to complete it during baby’s nap time. Most importantly, it helps promote empathy and emotional intelligence as well as being educational.

Do you and your kid know the rhyme about the 5 Little Pumpkins? It goes like this:

5 Little Pumpkins sitting on a gate

The first one says “oh my it’s getting late”

The second one says “there are witches in the air”

The third one says “but we don’t care”

The fifth one says “I’m ready for some fun!”

And OUT! (clap loudly here) went the light

And the five little pumpkins rolled out of sight

It’s a really fun rhyme and you can discuss what each pumpkin is thinking or feeling even before starting the activity.

The art and craft portion of this activity is making a picture of the 5 little monkeys on the gate. This is probably most appropriate for preschool aged kids, but toddlers can definitely do it too with a little help from a parent. You can do this any number of ways, but here are the materials we used for ours:

Cut (or let your preschooler do it with kid scissors) straight strips of the brown construction paper and glue to the dark blue paper as the fence and gate.

Glue the 5 little pumpkins to be sitting on top of the brown fence and gate.

Go through the rhyme with your kiddo and discuss what each of the pumpkins in the rhyme is feeling. Is the first pumpkin worried? Is the fifth pumpkin excited? There could be different emotions associated with each pumpkin.

Try saying the words for each pumpkin in different voices (scared vs. excited for example) and see if your child can spot the difference. You might have a different take on the five little pumpkins’ feelings from your child, and that’s ok. My daughter and I actually each made a picture that represents what we thought.

Some of the feelings we settled on for the pumpkins were: worried, scared, bored, excited, happy.

The next step is to draw the faces on the pumpkins in your five little pumpkins halloween craft. Use simple features: eyes, mouth, eyebrows. Eyebrows are pretty important in this case because they are such an expressive part of our faces.

Finally, once the pumpkin faces are done, let your kiddo decorate the rest of the picture with the halloween stickers. Put some trick or treaters walking by the fence. Put some witches flying in the sky. Make sure you cut out a moon or put a moon sticker (or three) in the night sky.

Your dark halloween night can be as busy or quiet as you want it to be (yet another reason for everyone to make their own five little pumpkins halloween craft!)

When you’re all finished, make sure to walk through the rhyme again and act out each of the pumpkins feelings based on their facial expression. This is a great craft to do as a family too (where each person does their own) because you can also draw attention to the similarities and differences in people’s “sad” or “happy” or “worried” faces and voices. Dad’s sad face might look different from mom’s, so how do we know what they’re feeling? We even wrote in little speech bubbles with each pumpkin’s words.

This was a really fun craft to do. We obviously used more craft supplies than was necessary with the googly eyes and stamps. But it can really be as simple or as complicated as you want it to be.

Check out this density tower activity with everyday liquids, perfect for preschoolers.

This is a great art and craft project to make your own holiday cards with your kiddos.