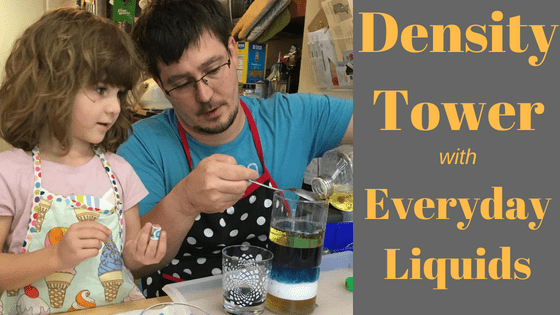 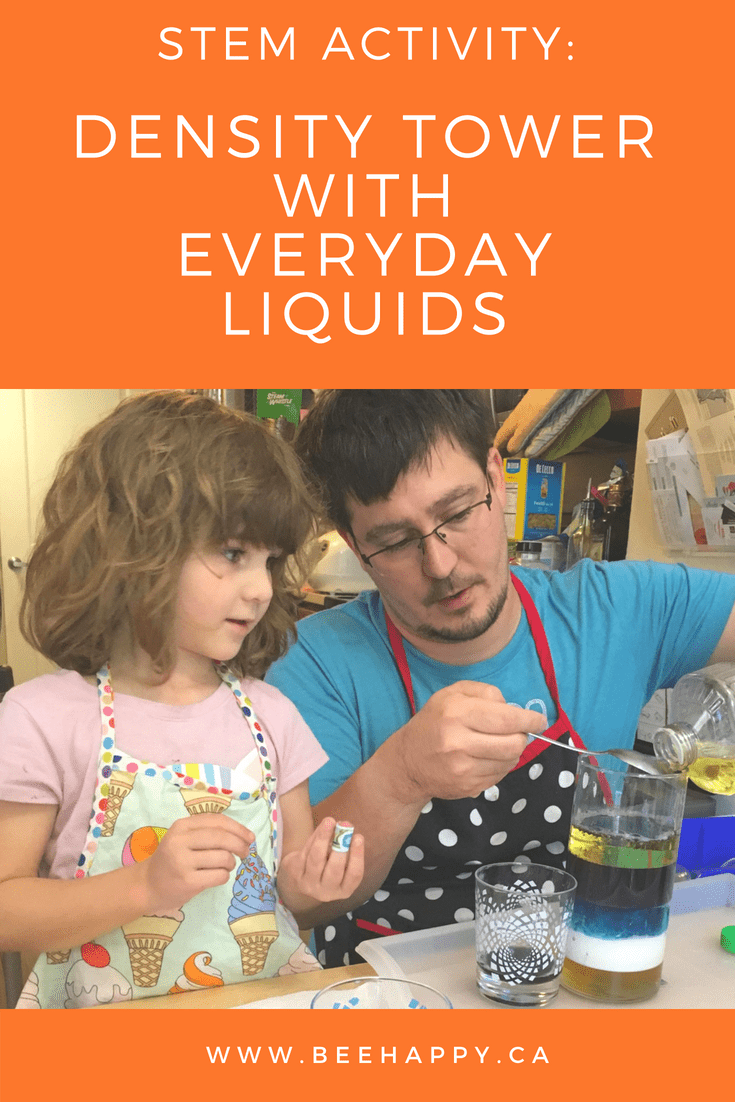 I posted about this on my FB but figured I’d add a more permanent post. This density tower using everyday liquids experiment worked out so well. It was fun to set up and fun to test. The best part is that we didn’t have to buy anything. All of the liquids in this density tower are ones we have in our kitchen on a regular basis.

I am a huge fan of STEM (Science, Technology, Engineering, Math) activities. Some of ours work out better than others. It’s important for kids to learn that even if an experiment doesn’t go right, it was still worth doing. When something fails, we discuss the results anyway, what we were expecting and what went wrong. We try to use the right language (words like hypothesis and reaction) so that our kids can be comfortable with scientific vocabulary when the times comes. We try to use the right equipment – we have a toy microscope and we regularly use test tubes and pipettes. Kids are thrilled to have a chance to use “real” tools.

This density tower using everyday liquids was a very successful experiment and it’s really easy to do. Get your child to find objects made of various materials to see which layer of liquid they will settle on. It’s helpful to use a flashlight (a light table might work too) since some of these liquids aren’t translucent enough to see through. Keep in mind that most of the liquids in this density tower are water-based so you need to be gentle when pouring them to avoid mixing them up. 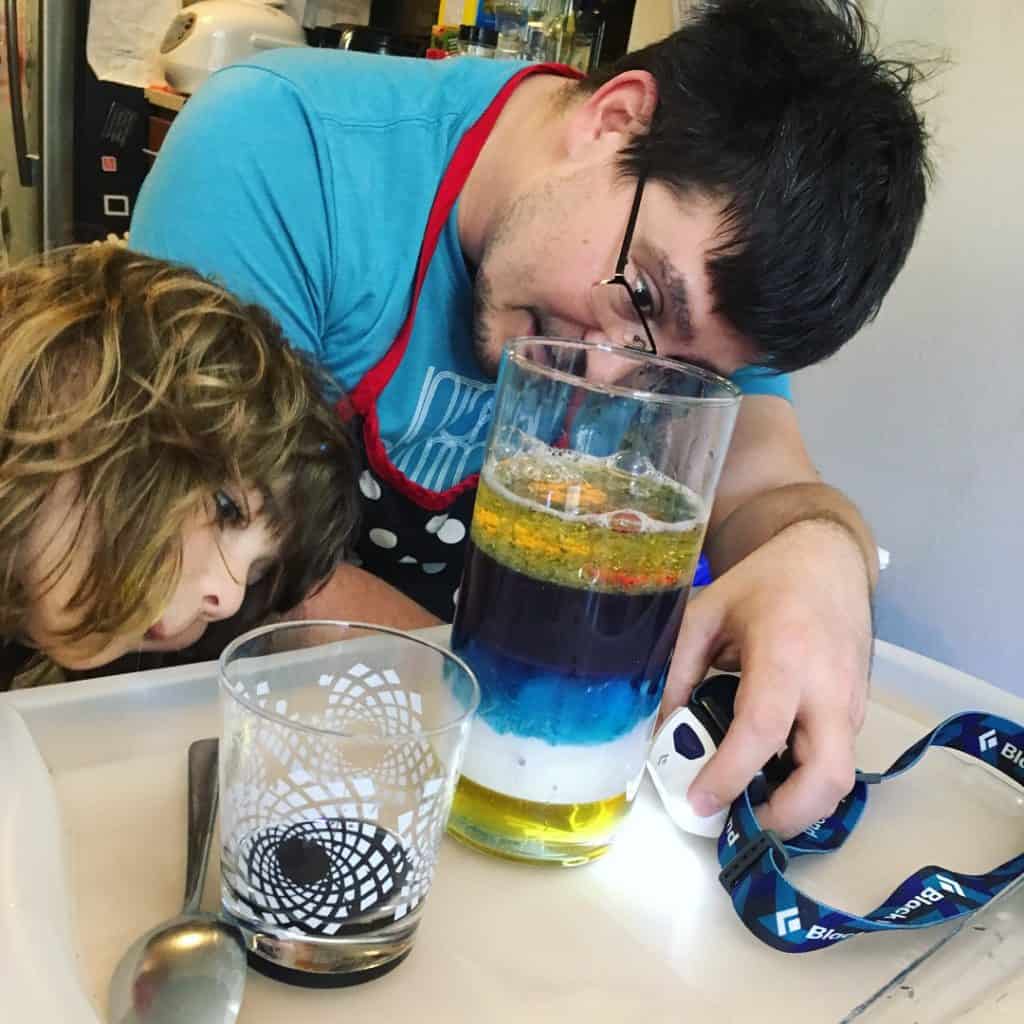 I was actually really surprised that the different objects consistently landed and stopped on the same layers in the density tower. When I was researching and setting it up a part of me expected it to be a flop where everything just drops to the bottom or floats on top. But we managed to see the different liquids holding their own.

I would advise dropping the really dense objects (metal bolts, rock) towards the end because they cause the most disturbance between the liquid layers.

The results we had were as follows:

Overall I’m happy with those results. They were consistent, we have multiples of the tomatoes, buttons and grapes and they landed in the same liquids as each other. I wish we had found something that would stop in the water layer on top of the soap but none of the objects in our experiment did. If you do this activity and discover what would float on top of dishsoap, leave a comment below. I want to find out!

Want even more? Here are some suggestions for a follow up about this experiment

Hope you enjoyed this STEM activity! Let me know in the comments what other STEM activities can be easily done at home with simple household items. Looking for more at home STEAM activities? Check out this post on making green slime. 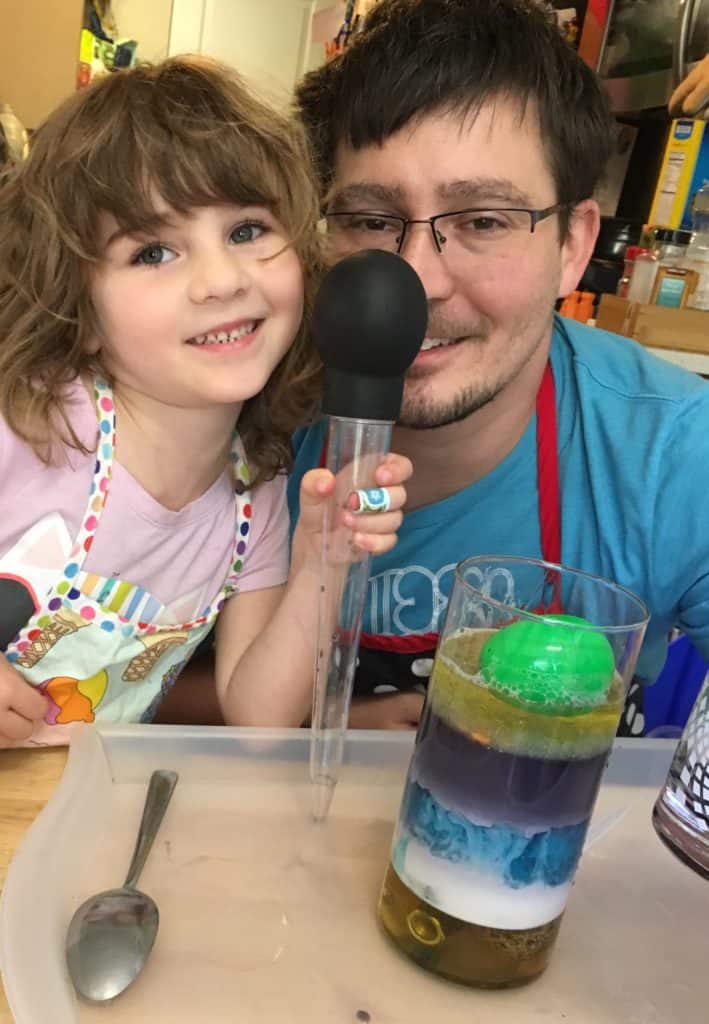 We love these kinds of experiments because at this age kids learn mostly though play. Read more about why play is important in the early years.