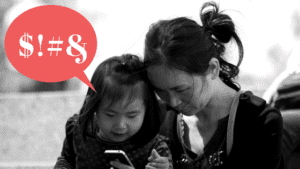 When Lulu was a toddler we all giggled at all the accidental swear words she was saying. Blueberries became “boobies”, fork became “fuck”, crouton became “cunt” (I don’t even know how she got to that one). We knew what she was saying but still laughed immaturely at her innocent funny toddler mispronunciations. Every once in a while these mistakes happened in public or with people who were not aware and resulted in embarrassing, but hilarious, stories to be shared for a lifetime.

I asked some other moms to share their adventures in funny toddler mispronunciations. These stories are as entertaining as they are cute.