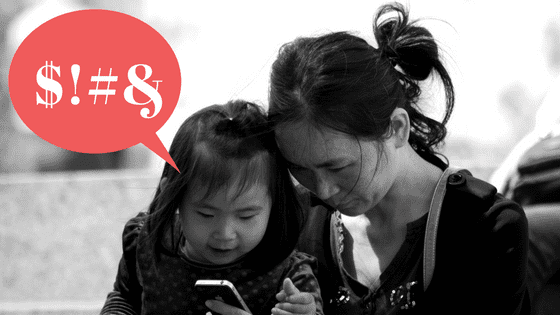 When Lulu was a toddler we all giggled at all the accidental swear words she was saying. Blueberries became “boobies”, fork became “fuck”, crouton became “cunt” (I don’t even know how she got to that one). We knew what she was saying but still laughed immaturely at her innocent funny toddler mispronunciations. Every once in a while these mistakes happened in public or with people who were not aware and resulted in embarrassing, but hilarious, stories to be shared for a lifetime.

I asked some other moms to share their adventures in funny toddler mispronunciations. These stories are as entertaining as they are cute.

“We were flying on an airplane with my 1.5yo daughter who was still traveling in my lap. We were seated next to a tall man in a business suit. He had his hands folded in his lap. My daughter points straight at his crotch and yells, loudly, ‘cock! Cock mommy, cock!’ The guy looked at me shocked and I, red faced, had to explain that she was pointing to the watch (clock) on his wrist… ” – Diana

“I was putting my daughter to bed last night and giving her all the hugs and kisses. She says ‘I’ll kiss you!’ She kisses my cheeks then looks me straight in the eye and says ‘I want to kiss your nipple’… I said ‘that’s not an appropriate place to kiss mommy, how about my cheeks’. She pokes my face and again says ‘your nipple!’ My pimples, she wants to kiss all my pimples” – Megan

“I grabbed the wrong book once when headed to church. My daughter started loudly telling one of the men about her book ‘F**k in socks’ as she couldn’t say ‘fox’ properly, in the middle of the church” – Maria

“My niece had trouble properly pronouncing “f” and “sh”… and she loved fishing. When we were out shopping in a very busy store she saw a fishing game and excitedly started yelling “Auntie, bitchin’! Bitchin’ Auntie! Let’s go bitchin’!” – Anna, Abrazo and Coze

“Lukas is starting to call for his brother Tristan whenever he is out of his sight, Tristan comes out ‘Titty’. Tristan has a speech disorder and can’t say Lucas but try’s to call him Lukey but it comes out ‘Poop-y’. I’ve had quite the looks while grocery shopping as they’re yelling each others name back and forth” – Michelle

“One of my son’s first words was ‘eyes’ and he often pointed at strangers who were wearing eyeglasses and share the observation that they were wearing ‘eyes’. Unfortunately, without context it sounded a heck of a lot like ‘ass’. Not the ideal thing to say while pointing at people” – Teenah

“my daughter LOVES the homemade meatballs my uncle makes. When she was two we went to their house for a Superbowl party and I told her ahead of time the special meatballs would be there. She was so excited! We got there and she kept asking for ‘nipples, nipples!’ At first I had no idea what she was talking about and then it hit me, she can’t say meatballs! Thankfully it was just family around! We had a good laugh about it” – Lauren, Heart Of Deborah

“My nephew used to love Thomas the train. He’d often take the toys with him to play with at restaurants. He’d always love how Thomas is friends with Percy. But it would sound like ‘Thomas likes Pussy'” – Kimberley

“My son was around 3 and a half and so far every beginning of a word that started with S he pronounced with a D. It was the first time meeting up with a moms group in our area so we met them at the park. Everything was going great when my son comes running across the park yelling ‘mom mom look at my big dick. I have a big dick look look how big it is want to touch it!!???’ I immediately knew what he was trying to say especially since he was waving a stick around like a trophy but a few moms look mortified. I quickly explained what he meant and everyone burst out laughing which only got worse when he reached us group of moms and wanted to show everyone his stick and have them feel how big it was” – Ashley, Mommy Daze: Say What?

Do you have embarrassing and  funny toddler mispronunciations stories of your own? I’d love to read them. Leave a comment below.

Want more funny? Check out these Five Things That Are More fun with kids