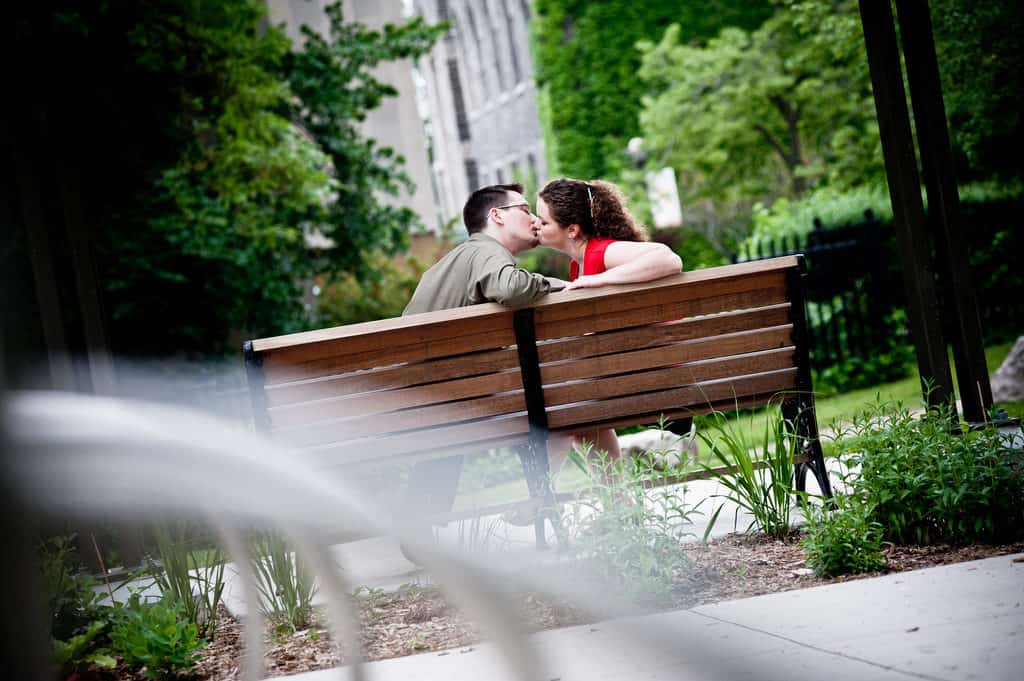 This spring will mark 14 years since Husband and I met and began our geeky love story. We were both studying computer science at the University of Toronto at the time. Sometimes I marvel at all the things that had to happen to bring us together and I’m amazed that it actually came to be. I don’t really believe in fate. I don’t think Husband and I were destined to be together no matter what. I give Husband all of the credit for his bravery and quick thinking that led to our really awkward meeting and subsequent romance. This is the story of how we met.

When I was in my second year of university Husband and I were in the same Programming Languages class together. We had never met before this class despite both being registered in the CS department. I noticed him and thought he was really cute. One day I even made a point to smile at him before class started. How did he respond? He gave me a dirty look! To this day he claims that this never happened but it did. After that I resigned myself to thinking he was just one of those nerdy guys who would rather play D&D than talk to girls. Oh well.

It didn’t help his image that he was one of the few people in the class who actually asked questions and vigorously typed on his laptop the entire time. (I would later learn that he was actually on IRC chatting with his friends, telling them about the cute girl in his class that he wanted to talk to – a.k.a me.) He was also in my tutorial for the class. The TA proved to be kind of useless and I didn’t feel the tutorial added any value so I often missed it. Husband on the other hand was a real keener. He too saw that the TA was no good. But he sat in the front row and actually bothered to argue with the TA and correct him. Something he needed to do a lot.

Towards the end of the semester Husband apparently made up his mind to purposely talk to me before the semester was over. If I showed up to class. Which according to him I didn’t (did I mention that it was during lunchtime?). When I did attend class I usually sat with a friend of mine whom Husband had originally assumed was my boyfriend. Because that’s the only reason a  girl would attend a CS lecture, right? He was a slightly aggressive-looking Eastern-European guy. He definitely looked like someone you don’t want to mess with. I guess somewhere along the way, Husband figured out that we probably weren’t dating and that I was actually registered in the class – or that I was worth the risk anyway. Even though I don’t remember missing as many classes as he claims, I apparently foiled his plans to slowly get to know me. Because the next thing he knew it was the last day of lectures before the summer.

I don’t actually know how we missed each other on campus before, because after that day I ran into Husband constantly. But at this point he thought this might be the last time he would see me, so he decided to corner me after class. Plans that I unknowingly foiled once again.

It just so happened that we received an assignment back and the friend I sat with was very disappointed with his grade. So there I was, ignoring the professor and listening to my friend rant about the assignment and the prof and how unfair life was. Finally I said “you know what, we’re not paying attention anyway and it’s the last day so how about we get out of here?” My friend agreed and we started heading for the door halfway through the last lecture. By this point in the year I had completely stopped entertaining any notions of talking to the cute nerd typing vigorously on his laptop all lecture long. As I was leaving though, I saw out of the corner of my eye that he was getting up too. He left his stuff and only grabbed his wallet. I didn’t think anything of that. I especially didn’t think that he had to quickly come up with a new plan and chase me out of the lecture hall.

Outside of the lecture hall, my friend and I talked for a couple more minutes and then said our goodbyes. I was heading up to the lab to, let’s be honest, play computer games. As I was getting my stuff together in the empty lobby of the building I saw Husband out of the corner of my eye standing somewhere near the coffee shop, counting the change in his wallet. The next thing I knew, he was heading towards me, change in hand. Using my incredible detective skills I was sure that he was about to come over and ask if I had a quarter to spare.

As much as I am painting Husband to be awkward and nerdy, I can be pretty awkward and nerdy too. Especially in unexpected social interactions. As he neared me, I was trying to remember whether I have any change on me, where in my bag it was and whether it was worth the hassle of getting it out to help him scrounge up enough change to buy a coffee. Finally I decided that I will just politely tell him no. He came to stand in front of me, looking all awkward and embarrassed and cute. I was waiting for him to say what he was going to say and had my reply on the tip of my tongue, “Sorry, I don’t have any change”. Then he uttered the last words I ever expected to hear from him, “I was wondering if I can take you out to dinner sometime?”

I think he may have said something like “hello”, but if he did my brain didn’t register it. I am not a girl that strange men usually hit on (except when they are super creepy) and nerdy computer geeks are not usually the kind of guys who routinely ask out strange women to dinner (trust me on this one). I don’t think there was anything he could have said that would have surprised me more. This unexpected turn of events turned me into a complete bumbling idiot. Seeing as I could no longer use the answer I had practiced in my head, I stood there frozen, staring at him with my mouth open. I’m surprised he didn’t think I was having a mini-seizure. In hindsight it’s kind of fortunate that I didn’t blurt out “I don’t have any change” after all. I later learned that the looking through his wallet act was meant to make his seem like he was going to buy something from the cafe so it didn’t look like he was stalking me out of the classroom. Even though he was.

When I regained my ability to speak, I did not fare much better:

Husband: *Still holding change in his hand* “hi I’m G…[I assume he said something along these lines before asking me to dinner]… I was wondering if I can take you out to dinner sometime?”

H: *hands me a piece of paper*

me: *write down ONLY my phone number*

That’s right. I didn’t even introduce myself. I didn’t write my name next to the number either.

H: *Looks at me dismayed*

Yes, I actually said that. Smooth, right? I’m surprised he didn’t give up on me there and then. At this point he thought that I wasn’t interested and probably gave him a fake number. In reality this was my embarrassing attempt at being nonchalant.

He then remembered to ask the second most important question “oh, by the way, that big scary guy you sit with in class, that’s not your boyfriend is it?”

Luckily (and surprisingly) he didn’t give up and he did call me. We talked on the phone a couple times and eventually went on a date and the rest is history. It took a lot of bravery on his part to approach me the way he did. He was very sweet and gentlemanly. After the initial shock and awkwardness wore off we both had a good laugh and now we have a funny story to tell about how these two geeks met and how our geeky love story began.