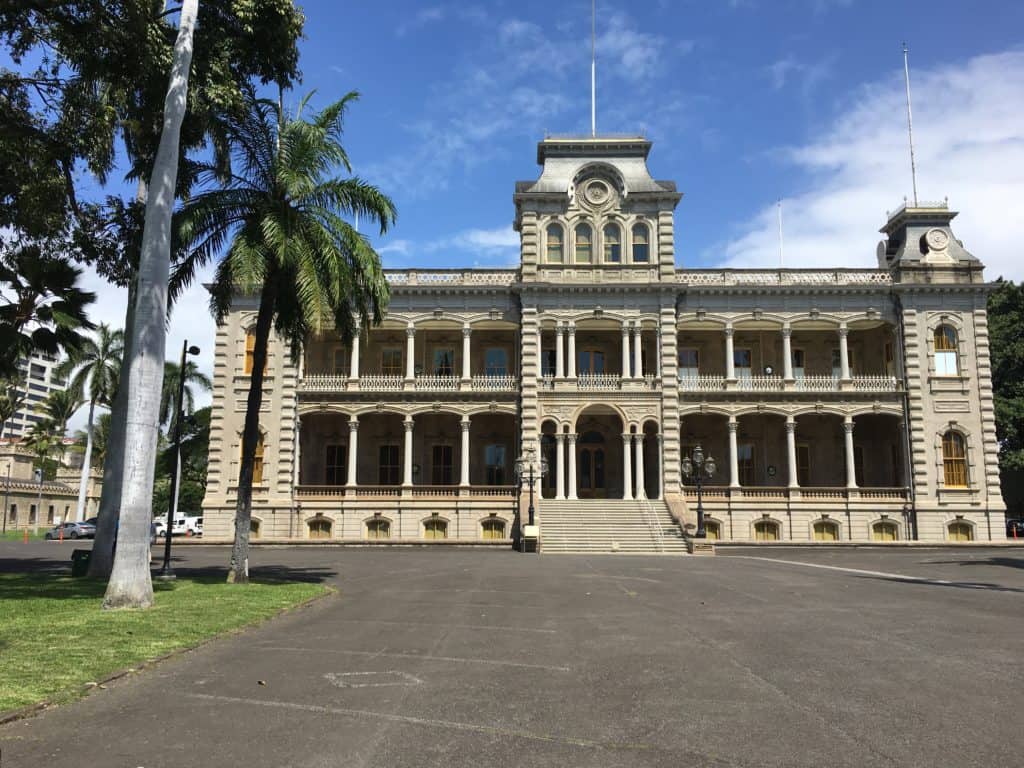 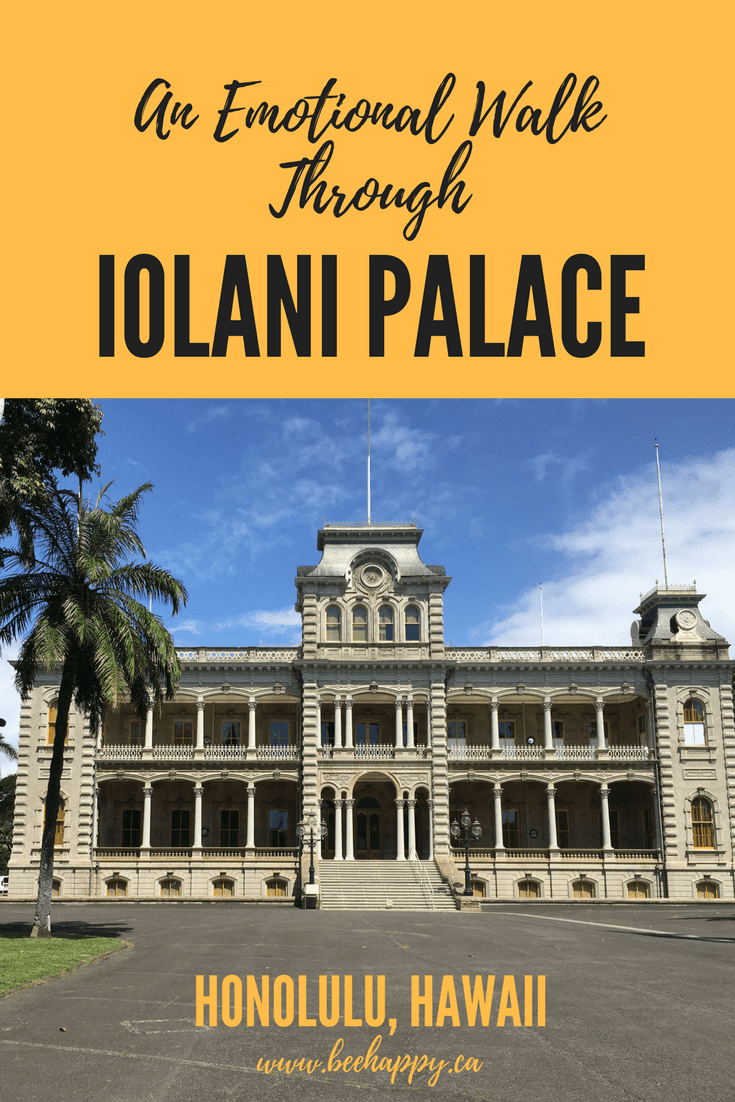 If you’ve been following my Facebook and Instagram pages you have no doubt noticed that we were in Hawaii for a couple of weeks (and if you haven’t, go follow me right now). Hawaii was incredible, every bit as beautiful as I imagined it would be. I always get a certain joy from traveling to places whose beauty was not exaggerated in movies and photographs. It really is that gorgeous everywhere you look.

I was having a hard time deciding which part of our vacation to focus on for this post. I always feel like pictures tell a vacation story much better than words can describe. I finally decided to write about something that has really touched my heart while we were in Honolulu visiting Iolani Palace, the residence of Hawaiian royals including the last Hawaiian monarch, Queen Liliuokalani. Queen Liliuokalani’s story feels much more poignant and personal when you’re walking through her palace-turned-prison. It is a history I knew very little about before traveling to Hawaii.

Self guided walk through Iolani Palace

I had known a very short version of Hawaii’s history and how it became a state. I’d learned that Hawaii was annexed by the US illegally and it’s native population was oppressed. That is (unfortunately) not a new story in North America and was barely surprising. But what I didn’t know were the details of just how far these American land owners went or just how recently this all went down.

Iolani Palace is really beautiful and very lovingly restored. You can tell that great care is taken to preserve it and its history. No outside strollers or bags are allowed to go into the palace. They provided strollers for children under 5 so they wouldn’t run around touching things and they even provided booties to cover our street shoes so that we wouldn’t ruin the original hardwood flooring that royalty walked on not so long ago. I felt that it was a good balance between protecting Iolani Palace and still making it welcoming and not inconveniencing visitors. 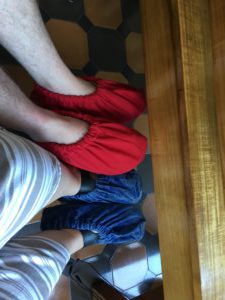 I learned that Iolani Palace was only build in the end of the 19th century, with an unfortunately short-lived history as the home of Hawaiian royalty “Built in 1882 by King Kalakaua, Iolani Palace was the home of Hawaii’s last reigning monarchs and served as the official royal residence and the residence of the Kingdom’s political and social life until the overthrow of the monarchy in 1893”.

A group of American businessmen and plantation owners basically annexed the country of Hawaii, overthrew the local government who allowed them to own land and do business here in the first place. They even ignored their own President, Grover Cleveland, who opposed annexation and recommended that the Hawaiian monarchy be restored.

Instead of the monarchy being restored, Queen Liliuokalani was forced to sign a letter abdicating her throne. She was then put on trial in her own throne room and was imprisoned in a bedroom in her own palace. That’s the basic story I heard on the tour of Iolani Palace. I included lots of links if you want to learn more.

An emotional walk through time

It’s one thing to detachedly read about it and a whole other thing to wander the hallways where this went down. Part of why this affected me so much is that it really wasn’t very long ago at all. Hawaii, as a country, seemed to be very industrious and in the course of the 19th century, in only a couple of generations really, adapted to many Western ideas and adopted a lot of agriculture that would prove to be very beneficial to the West (especially the USA as it turned out). Hawaii also seems to have been a place for many foreign immigrants and visitors and much of its culture and cuisine has Asian influences (many plantation workers in the 19th century came from Asian countries).

Iolani palace reflects this multicultural, Western-aspiring, tropical-paradise combo pretty well. It has an airy and open feel to it, very grand but not stuffy. The Palace is pretty modern too, as far as palaces go. It had running water and electricity. Really the en-suite bathrooms are not so very different from the modern bathrooms we have in our homes. It isn’t a relic of some bygone times. Being inside the palace rooms felt as if it all just went down very recently. There are even actual photographs of these events.

The Iolani Palace rooms where the monarchy ended

The throne room is basically a big ballroom. It’s a beautiful space designed for parties and for welcoming foreign dignitaries. It was heart breaking to imagine what it must have felt like for Queen Liliuokalani to be put on trial there. This room was clearly designed to present the kings and queens of Hawaii to the rest of the world. It’s ironic that the room which was meant to showcase the queen in all her glory became the courtroom where she was stripped of everything she was meant to be. 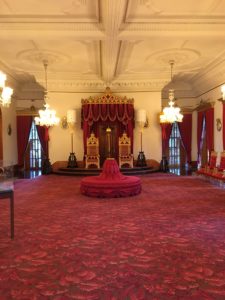 Visiting the bedroom where Queen Liliuokalani was imprisoned was definitely chilling. The windows in that bedroom alone are frosted glass so that the queen could not see what goes on outside the palace and so that no one could pass her messages from the outside (they feared another attempt at a rebellion). There are no furnishings displayed in this bedroom. Instead, in the center of the room there is a large quilt that Queen Liliuokalani made during her imprisonment. The quilt has squares representing Hawaii’s past and the queens uncertain future. Queen Liliuokalani’s quilt has a melancholy quality to it. You can almost picture the hours of work put into it when she was stuck in her gilded cage. The center square of Liliuokalani’s quilt includes the embroidered words “Imprisoned at Iolani Palace … We began the quilt here …” 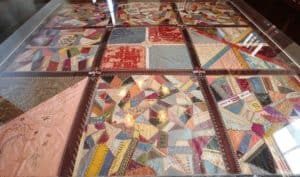 Seeing this room with a giant quilt in the middle and no view of the outside stayed with me for the rest of the trip. I keep thinking how devastating it must have felt for Liliuokalani, how helpless she must have been when her country and her whole future were torn away from her and she, the queen, couldn’t do anything about it. I can’t imagine the feeling of hopelessness she must have felt appealing to the US and the US government not doing anything about their own countrymen – even when the American president agreed that her power should be restored. It must have felt like a slap in the face when the countries Hawaii had done business with in the past, recognized the new illegal government that took over.

I won’t pretend to have any answers or even the whole story. Smarter people than me have spent time documenting the history of Hawaii and debating what its future should be. I will say that being there, in the place, among the photographs and portraits, gave me a lot of perspective and many uncomfortable feelings. Trying to put myself in the shoes of this leader who was stripped of everything was a touching experience. I really loved our vacation in Hawaii. I daresay I’m glad that Hawaii is a part of the US – and I’m sure there are many Hawaiians who agree; I am also aware that many do not. But the underhanded way Hawaii became a part of the US is heartbreaking no matter where you stand on what the future should hold.

Leave a comment and let me know if you’ve enjoyed this post. I’d also love to hear about emotional destinations that you’ve visited.