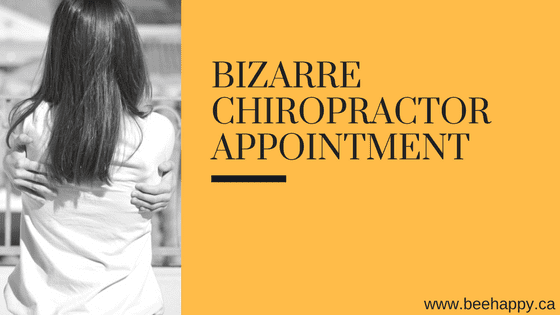 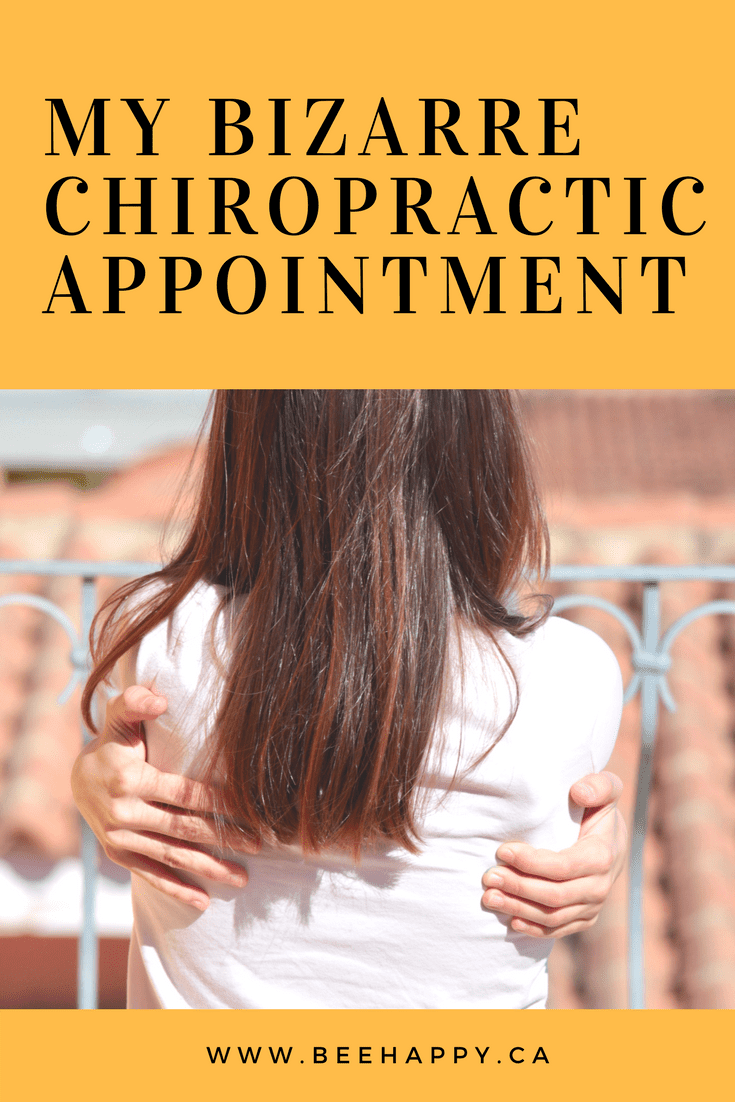 When I was pregnant the second time, after moving away, I asked my midwife for some chiropractor referrals and made an appointment with the one closest to home. I have been to my share of chiropractic appointments and knew what to expect from a good back crack (or spinal manipulation). What I got during this bizarre chiropractor appointment felt like someone would jump out yelling “PUNKED” any second. The chiropractor practices something called P-DTR (Proprioceptive Deep Tendon Reflex®). Whether it’s legit or not, I’m not so sure. But it sure makes for a strange and funny story.

When I went to see him, he seemed normal at first. He did the normal manual adjustments on my lower back like I’ve had many times before. He sees a lot of pregnant and postpartum women in his practice so he seemed to know what I was talking about when I told him about having SPD (Symphysis pubis dysfunction).

But then he started going on about how sometimes when the body experienced trauma in the past, the place of the trauma (like a scar from tear or surgery ) will radiate pain to other parts so you need to find the place of the original trauma and “reprogram” it using this pseudo-neuro-science technique that he practices, P-DTR. It seemed harmless enough, if unusual. He implied that the tear and scar from my first birth was likely causing my pelvic pain. I kept trying to explain to him that I had the same SPD symptoms the first time around but also wanted to give him the benefit of the doubt since he was so assured that he can help me with pain that regular chiropractic adjustments would not be very effective for.

I was asking a million questions and he was happy to answer them. The appointment took close to an hour. The P-DTR technique worked like this: He had me hold up an arm or a leg and he applied pressure to it trying to push it down, and told me to counter his pressure and hold the limb in place. Supposedly there are areas in the body which send different neural signals to your brain and in turn to the muscles, including pain signals. So I’d be holding up my arm, he’d rub my shoulder in a specific spot and then do the counter pressure again and I wouldn’t be able to hold the arm up anymore. He claimed that he was applying the same amount of pressure but that touching this or that spot signaled my muscles to relax and even though I was trying to hold my arm up he had reprogrammed the signal (supposedly). That’s an example of how he makes sure that everything is ok and the right neurons are sending the right signals to the right places.

After determining that my muscles and signals are working properly (Duh), he went to look for where the problem areas are. This is where it got weirder.

He’d find a painful area and press it or tap it and check whether I go weak or strong. But it wasn’t consistent. So sometimes he’d say see you went weak (meaning I could no longer hold my arm up after he pressed on the pain point) because it’s a problem area. Other times he said that should have relaxed my muscles but didn’t because that problem area was tightening them. Sometimes he pressed, other times tapped, sometimes tapped twice, sometimes three times because apparently your brain interprets those differently. Presumably he knew exactly which one to do in which spot on my body.

Then, when he found a problem area (meaning pain point), he had to find a “counter” for it. That’s how he reprogrammed or interrupted the pain signals. This part made even less sense because the ways to redirect the signals were numerous. A few times he’d press on a different place at the same time as the problem spot. Then check again whether I can hold my arm up. Or a few times he put this vibrating metal thing on my head, and after it vibrated on my head for the right amount of time (you try not to laugh), he checked the arm-push again. It was the oddest sensation.

The vibrating thing didn’t work on me apparently. He said in like 80% of people the counter point for pelvic pain is the top of the head. But he did that for a few sore spots and the head vibration never seemed to work. So I’m not in the 80% I guess. He stuck to mostly applying different kinds of pressure on different “counter” areas in my body. Each time checking to see if he can push my arm down.

I was asking so many question about how this works that he explained that different stimulus can work to help change the misfiring signals to pain receptors, not just touch but sound as well. That even your memories can trigger pain receptors to fire. To demonstrate, he pressed a sore area near my pelvis and was like think about your labour and the tearing. And then he did the pushing my arm down test and it went weak. So he was like “see the memory of pain makes you go weak”. Then he was like think about it again and he snapped his fingers and my arm stayed strong. Supposedly the snapping interrupted the pain signal. I’ve never felt a stronger urge to roll my eyes.

It isn’t that I’m against the idea of false pain signals or neurons needing to be “remapped” (not that I know anything about this stuff). I’ve heard things about transferred pain and receptors misfiring. My main hesitation is whether the cause for the pain was what he said, and if the techniques he was using actually do anything to reroute pain in your brain. He seemed to imply a lot of my pain was caused by the false pain signals. Like at one point he “figured out” that the trauma from my vaginal tear was causing neck weakness. Even though I’ve had neck pain and seized muscles and headaches cause my tight neck muscles for years before I ever had a baby. Seemed very hokey.

He also claimed that none of the taps, presses, vibrations or snaps were random. That it was all very detailed neurology stuff that you have to study and I wouldn’t understand. He also implied that because of these techniques he can help me with pain that no one else can help with. Whenever a service provider tries to pull the “Only I can help you” card, it’s an immediate red flag.

At the end of the day, I don’t regret going there. This chiro did help me with my back pain. The manual adjustment was effective. Whether the weird bizarre chiropractor P-DTR pseudo-neuroscience did any good, I’m not sure. Maybe. But I doubt it. And now I have a funny chiropractor story under my belt. I’m probably misremembering and misrepresenting a lot of the “theory” behind this method. Take everything I say here with a grain of salt, it’s just based on what I remember from my one bizarre chiropractor appointment with P-DTR.

I have since done some research (aka googling) about this and this method is something called Proprioceptive-Deep Tendon Reflex (P-DTR). Sometimes seems to be referred to as Functional Neurology. The website has claims that it treats a bunch of stuff beyond chiropractic practice. Maybe someday this will become more proven and mainstream and I’ll have to admit I was wrong. But in the meantime when I emailed and asked my old chiropractor in Toronto about it and a couple others, they didn’t know what this was and never heard of it. So I’m going to hold off on calling this legit just yet.

Here’s a video of what an appointment looks like. There’s no metal vibrating head tool but lots of tapping on the head. The actual treatment starts around 1:44.